Of the royal residence at Holmen, several important monuments survive. The Håkonshallen, built in 1247-1261 served as the great ceremonial hall. Next to it, on the southeast side, was the Church of the Apostles, the Royal Chapel, which was demolished around 1300.

A new Apostles’ church was built around 1300 outside the then castle walls, probably on present-day Paradeplassen. This new decorated royal chapel must have been among the most splendid Gothic buildings in Norway – a true Scandinavian Sainte Chapelle. It was pulled down a few years prior to the Reformation, in 1529-1530.

The medieval castle walls have also largely vanished, but the present residential tower at the southeast corner still contains its medieval core. This ‘Rosenkrantztower’ was named after Erik Rosenkrantz who was castle governor from 1560-1568. Hidden behind a Renaissance façade is a medieval keep (donjon) with a chapel on the second storey and a bed chamber above from the time of King Magnus VI (1263-1280).

The chapel originally had early Gothic cross vaults and a large window on the east side, facing the town. The altar is preserved, as well as the piscina niche intended for liturgical rinsings next to it on the right. The fireplace in the corner was installed during Rosenkrantz’s period. 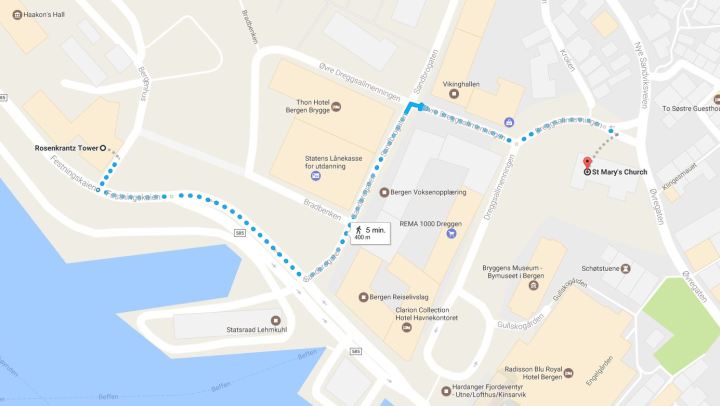